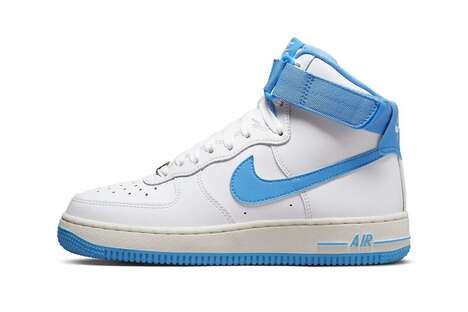 Nike announced the relaunch of its ‘Columbia Blue’ colorway for the Nike Air Force 1 silhouette. This colorway is being revived to celebrate the 40th anniversary of the Air Force 1 itself. The relaunched colorway has been renamed to the ‘University Blue’ sneaker, while the original Columbia Blue was released in the early 2000s at a high point in the AF1’s popularity.

The University Blue colorway features a plain white upper with an off-white midsole and a regal blue bottom sole. The iconic Nike Swoosh logo appears on the upper in the same blue, while the heel, insole, and strap are adorned in the same blue color. The toe vamp and upper have holes for air ventilation and comfort. Lastly, the Nike Air branding appears on the tongue as well as the insole of each sneaker in the pair.