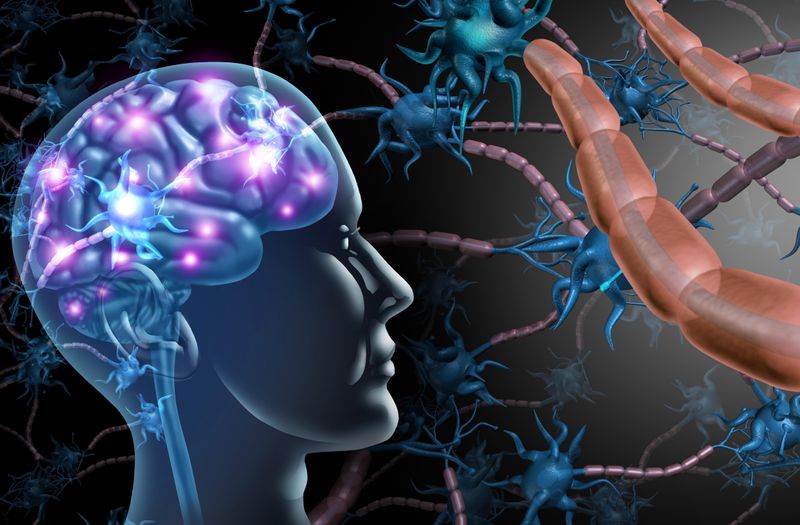 For years, researchers have suspected that the Epstein-Barr virus, best known for causing mononucleois, might also play a role in triggering multiple sclerosis. Now a new study strengthens the case.

The study, of more than 10 million U.S. military personnel, found the risk of developing multiple sclerosis (MS) shot up 32-fold after infection with Epstein-Barr.

Epstein-Barr virus (EBV) is ubiquitous, with about 95% of the population becoming infected at some point. Many people contract it as children, when it usually causes no symptoms. When people become infected as teenagers or young adults, it may cause mononucleosis.

Over the years, a number of studies have hinted that, in a small number of people, EBV may help raise the risk of multiple sclerosis. MS is a neurological disease caused by a misguided immune system attack on the body’s own nerve tissue.

People who’ve had mononucleosis, for example, are at higher risk of developing MS than those who never suffered symptoms from EBV infection. Meanwhile, people with MS can show high levels of antibodies against EBV several years before their symptoms surface. Researchers have also found EBV-infected B-cells in the brains of MS patients.

It all hints that something about the immune response to EBV infection can, in certain people, prompt the development of MS.

But proving the virus is a cause of MS, and not just a bystander, has been challenging. That’s partly because nearly everyone is infected with EBV, while MS is relatively rare.

It takes a massive and long-term study to identify people who are initially EBV-negative, then see whether a new EBV infection raises their risk of subsequently developing MS.

The new study, published in the journal Science, did just that.

“This is the strongest evidence we have to date that EBV contributes to MS,” said Mark Allegretta, vice president of research for the nonprofit National MS Society.

Allegretta, who was not involved in the study, said the virus is likely “necessary, but not sufficient” to cause MS. That is, it conspires with other factors that make people more vulnerable to developing MS.

Those include certain genes, as well as smoking, vitamin D deficiency and childhood obesity, said Ascherio, a professor of epidemiology at Harvard Medical School.

None of those factors, however, approach the 32-fold increase in risk tied to EBV infection, Ascherio said.

He called the latest findings “compelling evidence” of the virus’s role in causing MS.

In the study, U.S. military personnel were tracked for over 20 years. All had blood samples taken at enlistment, and then every two years.

Ascherio’s team found that about 5% were EBV-negative at the time of the first test.

Overall, 955 military personnel were diagnosed with MS while on active duty. That included 35 who’d initially been EBV-negative. All but one of those individuals became infected with EBV before their MS diagnosis — typically five years prior.

Compared with their counterparts who remained EBV-negative, those newly infected with the virus had a 32-times higher risk of developing MS during the study period.

One question is whether people in the pre-symptomatic stages of MS have a dysfunctional immune system that makes them more prone to viral infections in general.

So Ascherio’s team looked at whether MS risk was associated with other viral infections in the military personnel, including cytomegalovirus — another common virus that remains dormant in the body for life. They found no similar link between those viruses and MS.

Ascherio said it’s likely that something about the immune response to EBV, specifically, helps trigger MS. Exactly what remains unclear.


What kind of disease is multiple sclerosis?
See Answer

An editorial published with the study echoed the idea that EBV is necessary, but not enough on its own, to cause MS.

Infection is the initial step, but other “fuses must be ignited” to cause MS, wrote Drs. William Robinson and Lawrence Steinman, of Stanford University in California.

They raise the question of whether vaccines against EBV could help prevent MS. Such vaccines are under development: Moderna, maker of one of the messenger RNA COVID vaccines, just started an early trial of an mRNA vaccine against EBV.

Another possibility, Ascherio said, is that antivirals that target EBV-infected cells could be tested for treating MS.

Some newer medications for MS slow the progression of the disease by depleting certain B-cells in the body. Allegretta said it’s “reasonable” to speculate that one reason the drugs work is by reducing EBV-infected B cells.

The National MS Society has more on the causes of MS.